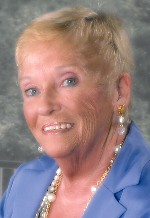 Mrs. Jaeckel was a member of St. Henry Catholic Church, Belleville, IL, and St. Clair Country Club.  She loved gardening and especially enjoyed decorating for the Christmas and Easter holidays. Joan loved golfing and bowling and looked forward to her monthly gatherings with her ladies club.

Joan was preceded in death by her husband, Dr. Fred J. Jaeckel, whom she married on July 23, 2004, and who died on October 6, 2012; her parents, Charles and Viola, nee Worms, Gain; a brother, Charles (Irene) Gain; a grandson, Michael Schaltenbrand; two sisters-in-law, Marion Gain and Betty Dobkowski; and a nephew, Douglas Gain.

Memorials may be made to PTOEC (Parent Teacher Organization for Exceptional Children).  Condolences may be expressed to the family online at www.rennerfh.com.

Funeral:  A Mass of Christian Burial will be offered at 10 a.m. Saturday, December 3, 2022, at St. Henry Catholic Church, Belleville, IL, with the Rev. Kenneth York officiating.