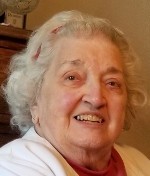 Mrs. Jennings was a certified medical assistant and retired as an office manager for Belleville Radiologists Ltd. She was a member of St. Teresa Catholic Church, Belleville, IL. She was also a member of the Belleville Senior Citizens and Women of the Moose. Joan also enjoyed bowling and was a part of the senior bowling league at Panorama.

Joan was preceded in death by her husband of 64 years, Edgar V. Jennings, whom she married on August 28, 1945; her parents, Dominic W. and Loretta, nee Herman, Biekert; and three sisters, Generosa Clark, Shirley Ehinger, and Marilyn Lehman.