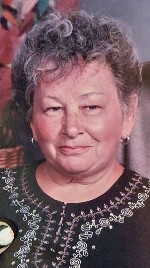 Joan was an office manager and retired from Auffenberg Leasing Department.  She was a member of Blessed Sacrament Catholic Church, Belleville, IL.

She was preceded in death by her husband of 61 years, Lloyd Louis Proffitt, whom she married on June 3, 1959, and who died on January 3, 2021; her parents Albert and Edna, nee Christ, Hulliung; three brothers, Stephen, Richard, and Jerry Hulliung; a sister, Edith Kula; and two sisters-in-law, Bobbi Hulliung and Penny Proffitt.

The family would like to give special thanks to Josh Council with VITAS Hospice and the staff at The Colonnade Senior Living.

Memorials may be made to Blessed Sacrament Catholic Church, Belleville, IL, or the Michael J. Fox Foundation for Parkinson’s Research. Condolences may be expressed online at www.rennerfh.com.

Funeral: A Mass of Christian Burial will be held at 11 a.m. Thursday, December 22, 2022, at Blessed Sacrament Catholic Church, Belleville, IL.

According to Joan’s wishes, cremation will follow the services.