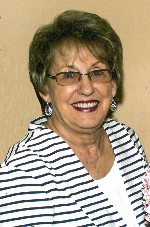 Joann was a devoted wife, mother, grandmother, and great-grandmother.  Her family was her life and she adored each one.  She was active in the school when her children were students, serving in the PTA as an officer and also was Chairman of the Advisory Board when the newest addition of the school was added.  She had great pride in the community serving on the Board of Appeals for several terms. She worked diligently for the swimming pool project, seeing that it was built for the children of the community.  After the pool was built and a swim team was formed, she served as President of the Kaskaskia Swim council, and also became the head score keeper. Joann served as President of the Junior Woman’s Club, won the Citizen of the Year from the Jr. Chamber of Commerce, and was named in the Who’s Who in American Woman’s Book. She was a member of the Order of the Eastern Star Chapter No. 542 in Freeburg and Chapter No. 411 in Sparta, IL, serving as Worthy Matron in both Chapters. Joann was Secretary of the Sparta Chapter, and Grand Officer of the Order of Eastern Star for the State in 1997.   She was also a member of Daughters of the Nile in Al Sihah Temple No. 29 and served as Queen of this Temple in 2009.  Joann was a hairdresser for 30 years, owning and operating her own shop out of her home.  Her greatest accomplishment was her husband and family.

Joann was preceded in death by her parents, Charles and Wanda, nee Wolff, Eller; and a brother, Charles.

Memorials may be made to Family Hospice or to the charity of the donor’s choice. Condolences may be expressed to the family online at www.rennerfh.com.