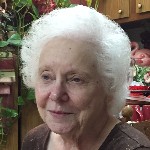 Mrs. Wagener was a floral designer and the former owner and operator of Jo Neil Florist in Collinsville, IL.  She loved animals, especially cats.

She was preceded in death by her husband of 32 years, Neil F. Wagener, whom she married on December 18, 1965, and who died on February 22, 1998; and her parents, William Thorvile and Bessie May, nee Spradling, Myhre.

Funeral:  Private funeral services will be held.  Burial will be at St. John Cemetery, Collinsville, IL.