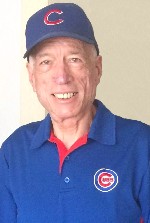 John attended grade schools at Jefferson Barracks and in Belleville. He graduated from Pinckneyville High School in 1965. After high school, he joined the United States Air Force and served from 1965 – 1969. He then attended Belleville Area College and graduated with a degree in Data Processing in 1971. John worked as a data processing accountant and later as company accountant for Callison Wholesale Liquor Company and retired in 1992.

He was an active member of Metropolitan Community Church of Greater St. Louis and participated in numerous church activities and served on the Board of Directors as finance chairman. John was active in many AA groups especially the Steps Alano Club. He was a solid mainstay who touched many, many lives, providing a great example of the 12-step recovery. John recently celebrated his 40th year of sobriety. He was a lifelong Chicago Cubs fan and watching Cub games was his most enjoyable pastime. He forever cherished their 2016 World Series Championship! He was an avid movie watcher and enjoyed traveling. John was an admired and loving uncle to Kim and John, and a loyal friend who delighted in meeting friends for lunch and conversing with them.  Most important, he was a devoted son, always keeping his mother upmost in his heart and soul.

He was preceded in death by his father, Udell Campbell; his grandparents, John and Clara Feddersen; special friends, Richard Barber and Hal Scheppner; cousins, and numerous close friends.

Memorials may be made to Metropolitan Community Church of Greater St. Louis or Steps Alano Club. Condolences may be expressed to the family online at www.rennerfh.com.

Burial will be at Mueller Hill Cemetery, Pinckneyville, IL.