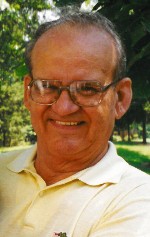 John worked at Conrail Railroad as an office administrator before his retirement. He belonged to the Transportation Communications International Union AFO-CIO-CLC, the Belleville / Swansea Moose Lodge 1221, and to the Belleville VFW Post 1739.

He was preceded in death by his parents, John Otis and Margaret, nee Fury, Fowler; three brothers, Charles, Harry and James; and two sisters, Dorothy and Alice.