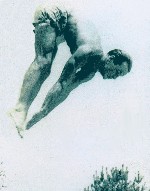 John graduated from Cathedral High School in 1944 and served in the Pacific Theater during the last year of World War II and beyond with the U.S. Merchant Marine aboard the U.S.S. Shiloh.  At the outbreak of the Korean Conflict he served with the U.S. Army at Ft. Belvoir, VA where he was a member of the swimming and diving team.  He was then transferred to Cheltenham Air Base near Bournemouth, England at the end of hostilities.  He was an intrepid traveler all his life and was able to tour the rest of Europe at that time.

In between his periods of military service, he and his older brother Willard, began building new homes, forming Conrath Brothers, Builders and Developers, a business partnership that lasted some 60 years. Among their major career milestones were, the development of the “New Additions” of Chenot Place Subdivision from 1960 until around 2000.  The Old U.S. Post Office Building, at 105 West A St., an impressive Beaux Arts style Federal building was active from 1911 to 1965. After a few years of decline the brothers saw the financial and sentimental value in the building, where their father had served as Assistant Postmaster. They then bought and renovated it. They sold it to Belleville School District #118 in 1970, which still occupies it to this day.  They also renovated the Henry Kircher Mansion on Kircher Place between N. Charles and N. Church Streets. The historic home of the Civil War Veteran and post-war Belleville Mayor was also in a state of decline.  After buying and rehabbing it in the late 1960s it became a modern apartment building.  They sold the building to another landlord and it still retains its residential function today. Past his aforementioned career pursuits, he continued as a very active broker, mainly with Coldwell Banker, Brown Realty into his 80s.

He was a member of the local order of the Elks Lodge and a member of Westhaven Bath and Tennis Club with his family and large circle of friends.  He enjoyed swimming, golf, tennis and diving there for many years.  His love of boating and water skiing included vacations to The Lake of the Ozarks along with day trips to Litchfield and Carlyle Lakes plus the Kaskaskia River, always in the company of family and friends. He taught many a novice the joy of water skiing along the way.  He was a member of the Belle Valley School Board and a trustee of the East Side Volunteer Fire Department.  He was a member of Cathedral, St. Luke and St. Teresa parishes throughout his life and served on the fundraising committee of the latter to build a new church in the late 1960s. He satisfied his lifelong fascination with aviation by obtaining his private pilot’s license.  He also loved music and was never shy when it came to entertaining, no matter the venue, whenever he spied an opportunity at an open microphone.

John’s lifelong wanderlust never faded. He was always ready to go anywhere, always curious about what was around the next corner.  He did much traveling in the 1980s and ’90s including two more tours of Europe where he revisited a few of the places he’d been during his military service.  The highlight was probably a visit to his ancestral hometown of Weinsberg, Germany.  One of his great-grandfathers, Frederick Conrath, emigrated from there in 1833 at the age of 13 with his family, eventually settling in Freeburg, IL.

His infectiously positive attitude, perseverance, and his open heart in helping others in business and life itself set the bar high and gained him much love and respect from anyone who knew him. His warm, sincere smile will be missed. His was the definition of a full life, well lived. He will be sorely missed by all of his friends, immediate and extended family. Those close to him who departed this world before him are appropriately being serenaded again with his favorite go-to song, “Pennies From Heaven”.

He was preceded in death by his parents, John G. and Helen Alma, nee Rudolph, Conrath; a brother, Willard J. Conrath; and a sister, Doris “Connie” (Leo G.) Wagner.

The family would also like to express their deep gratitude to the caring staff at St. Paul’s Senior Community.

Funeral:  A private graveside service was held Saturday, May 16, 2020, at Green Mount Catholic Cemetery, Belleville, IL. A memorial mass will be held at a later date.