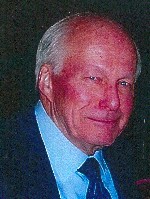 He was a United States Army Air Corps veteran.  Stationed in England during World War II, 1st Lieutenant Herrin served as a B-24 navigator in the Eighth Air Force.

In 1945, following the war, Mr. Herrin returned to Herrin, joining his brother-in-law’s jewelry business, which he later owned and operated until his retirement in 1991.

Surviving are his two daughters and sons-in-law, Judy and Frank Wojcik of Swansea, Illinois, and Barbara and Jim Spencer of Little Falls, New Jersey.  He is also survived by a sister, Phyllis Granneman and a niece, Jamie Granneman of Herrin, Illinois.

The family wishes to express its sincere gratitude to the caring staff at Mercy.

Memorials may be made to Hospice of Southern Illinois, 305 S. Illinois Street, Belleville, Illinois 62220 or to The Michael J. Fox Foundation for Parkinson’s Research, Donation Processing, P.O. Box 5014, Hagerstown, MD 21741.

Cremation has been accorded.  A private service, with military honors, will be held at Green Mount Cemetery at a later date.