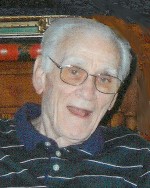 John was a general contractor with Keeley Construction Co., East St. Louis, IL. He sat on the Board of Assessors office, he served as president of the Illinois Builders Association, and he was a member of the Knights of Columbus. John later used his construction and engineering skills while working with Bauer Brothers Construction. He then wanted to end his career by working along side the Berner and Shober Engineering Group, located in Wisconsin. Throughout his years of hard work, he always focused on working on the hospitals throughout Illinois.

John’s original goal from the beginning was to be a doctor. His pre-med schooling put him in a situation entering the Navy in World War II, where he was a Senior Navy Medic. He served in South Beach, CA, the South Pacific, and many other locations while helping the wounded. Throughout John’s service he lost an eardrum that hindered him from accomplishing what he loved most, which was baseball. He played baseball in college and was even asked to try out for the St. Louis Browns, where he made the team’s minor league division. John had many talents.

He enjoyed playing violin alongside his wife and he learned how to speak some Latin while in the service. John had a fulfilling life with his wife and son, whom he cherished very much.

John was preceded in death by his loving wife of 68 years, JoAnn Keeley; his mother Cecilia Keeley, nee Frieze; and his father, John J. Keeley Sr.

He is survived by his son, Kevin Keeley;
two grandchildren, Ashley and Kyle;
and one great grandchild on the way.

Memorials may be made to the Alzheimer’s Association or to Blessed Sacrament Catholic Church. Condolences may be expressed to the family online at www.rennerfh.com.