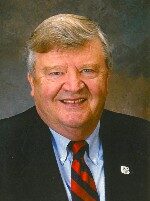 Print Obituary
John “Jack” George Weck, of Belleville, Illinois passed from this life peacefully at his home surrounded by his family on August 15, 2022, at the age of 79.  Born on December 4, 1942, he was the fifth child to George and Aggie Weck.  He built a wonderful life alongside his loving wife of 59 years, Sandy, nee Lauff, Weck.

His greatest joy was spending time with his family and friends. He was extremely proud of his 18 grandchildren and enjoyed attending all their school activities and sporting events

Jack never met a stranger, he connected with every person he met. Jack enjoyed bowling, fishing, volleyball, sitting on his back porch, and luncheons with friends. He had many lifelong friends, Bob G. and those who passed before him that he deeply missed, Fred, Jack, Ron, Kenny, Bob, Don and Len.  We are happy to know they are together again.

Jack worked for the Missionary Oblates of Mary Immaculate and the Shrine of Our Lady of the Snows for over 50 years and was named an Honorary Oblate.  He was a member of the Cathedral Parish, Cathedral Men’s Choir, Althoff Father’s and Friends, Althoff Bingo, the Belleville Chamber of Commerce and past president of the Serra Club.  He also served on many committees and received numerous awards throughout his lifetime.

Jack will be deeply missed by all who knew and loved him.

The family would like to give a special thanks to Dr. Amanda Cashen, Holly, and Becky for their years of care through Dad’s cancer treatment. Also to the Staff at Barnes-Jewish Parkview Hospital, St Elizabeth’s Hospital,  LHC Home Health Care, Dr. David O’Neill’s office, Evergreen Pointe, and Hospice of Southern Illinois.  We are extremely grateful.

Memorials may be made to the Belleville District 201 Bridges Program or Serra Club of St. Clair. Condolences may be expressed to the family online at www.rennerfh.com.

Burial will be held at a later date.