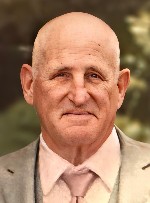 John is a United States Army veteran, during his active duty he served in the 101st Air Borne Division. He was an electrician for Afton Chemical Company formerly known as Ethyl Petroleum. John was a member of St. Henry’s Parish, former president for St. Henry’s Men’s Club, and Chief helper for all fish fries.

John loved to golf and enjoyed his Thursday night margaritas. Most of all he was the proudest grandpa and great grandpa in the world and enjoyed going to his grandkids sporting events.

He was preceded in death by his loving wife of almost 59 years, Bonnie K., nee Bassler, Kistner, whom he married on November 28, 1963; his parents, Bert L., and Dorothy L, nee Maes, Kistner; a brother, Gerald L. (Kathy) Kistner; a sister-in-law, Barbara Kistner; a brother-in-law, David West.

In lieu of flowers, memorials may be made to St. Henry’s Parish or to the Wounded Warrior Project. Condolences may be expressed to the family online at www.rennerfh.com.

Burial will be held at a later date at Jefferson Barracks National Cemetery, St. Louis, MO.