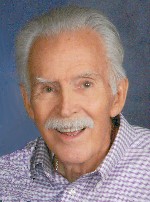 John was raised in Freeburg, IL, graduated from Belleville Cathedral, and atteded SIU Carbondale, St. Henry Prep Seminary, Belleville, IL, and St. Meinrad Major Seminary in Indiana.  He was ordained a Catholic Priest in 1963.  Prior to ordination, he spent five summers at St. Philip Parish in East St. Louis as their Recreation Director.  His first priestly assignment was as Assistant Pastor at St. Stephen Parish in Caseyville, IL.  In 1965, John was assigned to St. Mary Parish in Belleville, IL.  While there, he organized many parish athletic teams, and was instrumental in volleyball being played in Belleville parishes.  In 1971, John was named the Belleville Diocesan Catholic Youth Organization Director, and worked out of offices in Belleville, Fairmont City, and Breese.

John was very proud of the many “old-timer” men’s and women’s softball and volleyball teams and leagues that he organized.  In 1972, he took a “leave of absence” and went to Baltimore, MD to work for their CYO.  One year later, John went to Rochester, NY where he was the CYO Acting Executive Director. While in Rochester, John was laicized from the priesthood.  The next year, 1974, John started a 20 year career as Executive Director of the Mercy County CYO based in Trenton, NJ.  Back in Illinois in 1999, John was named Site Director at Daystar Community Program in Cairo, IL, an agency of the Diocese of Belleville, and retired from there in 2006.

John was preceded in death by his parents, Judge Edmund and Cecilia, nee Hoffman, Klein; and two brothers-in-law, Joseph Dickerson and Mel Baldus.

Memorials may be made to St. Mary Catholic Church.  Condolences may be expressed to the family online at www.rennerfh.com.

John blessed our diocese in so many ways. I was part of the “old timer” softball & volleyball teams and coahced many of the youth teams he organized. He gave us many great memories.

John was a good and cheerful man – always supporting, always encouraging. He will be missed. May the angels lead him into paradise.

Carol. – sorry to hear about John’s passing. Barbara and I are praying for you and your family. May John be resting in the peace of the Lord Jesus.

So sorry for your loss. Father Klein as I knew him as a child was a kind priest to us students at st stephens. He has always been remembered fondly by the Miles family.

I played volleyball at St. Mary’s in the last half of the 60’s. Then in 1970 when my husband Bob and I got married, Fr. Klein asked Msgr. Orlet if he could marry us. Msgr. Orlet gave him permission — so we are blessed that John Klein married us. Forty Five years this year.

I was a classmate of John’s at St Meinrad. Happy memories. Prayers and joyful thoughts to his family at this time. MB

Sorry for your loss. Prayers for John and his family; and memorial to St. Mary’s. John was my cousin (my father Leo Klein was his father’s brother). May John rest in peace.

I was saddwnwd to learn of John’s death having grown up with from 3rd grade through high school. May he and his family find comfort in God’s Mercy.

Dear Carol,
We are so sorry for your loss. We are so glad that we were able to see John at the 50th reunion of our class. We will keep your and your family in our prayers.

I will always remember John as a faithful member of Trenton Kiwanis. The plan his family had for caring for his mother and father was an inspiration to me in my career as a financial advisor. A truely selfless Christian.

Dear Carol, John, and Jimmy, So sorry to hear of John’s death. I read about it in the CYO Bulletin. I have fond memories of nice times when our children were young. Prayers and peace to all.