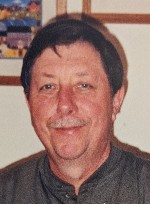 In his final days, John was cared for lovingly by his family with whom he was able to reminisce and recall special moments in his life. He talked frequently about his wife, Donna Jeannine (Theis) Racer, who died in 2010. They wed in 1963, and he would say, “I had her in my life for 50 years,” proudly rounding off their 47 years of marriage.

John loved to barbecue and root for his St. Louis Cardinals, seldom missing a televised game. He bowled in several leagues at Bel-Air Bowl and Panorama Lanes and played shortstop for the parish softball team at St. Teresa’s Catholic Church.

Born August 2, 1942, he graduated from Belleville Township High School 1960, and spent most of his career in garment manufacturing, particularly with the Miss Elaine line of gowns and robes. When he retired, he was manager of Bridal Originals in Collinsville, Ill.

One of his special places was Moose Lodge 1221 of Swansea, where he was an unofficial recruiter.

He was the son of the late John W. Racer Sr. and Helen V. Racer, Belleville, and the son-in-law of the late Albert P. and Jeannette J. Theis of Belleville.