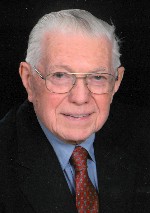 Mr. Tolan graduated Salutatorian of his class in 1945 from the New Athens High School. During WWII, John served in the United States Army as a SGT from July 27, 1945 to January 15, 1947 as an Occupation Warden of P.O.Ws. After his service, John had several employers, and for 20 years, he worked at Union Electric as a Senior Boiler Operator/Water Treatment Operator and retired in 1986 at the age of 59.

He was a former member of the Evangelism Committee, the Men’s Fellowship and Meals on Wheels. John loved music and enjoyed singing. He was a member of the Chancel Choir in both Waterloo and Granite City, IL, a member of the Men’s Barbershop Quartet, Waterloo, IL, and a leader of the McNamara’s Tolan Family Band. He enjoyed Rooting for the Cardinals – especially during the 80’s with Whitey Ball, hunting, fishing, playing cards, camping, traveling, and was an excellent dancer. He met the love of his life, Mardell, on the dance floor at the Shamrock Dance Hall in New Athens, IL.

Jack loved and supported his family with unconditional love. He was a faithful servant and loved the Lord. If you knew him, you would know his favorite saying was “Keep Smiling”. John enjoyed entertaining the residents of the New Athens Nursing Home with songs, especially with his favorite, You Are My Sunshine.

He was preceded in death by his parents, John and Florence, Nee Hoehn, Tolan; a brother, Terry, and sister-in-law Shirley Tolan; and an infant brother, Roy Tolan.

The Tolan family would like to extend a special thank you to the entire staff at the New Athens Home for the Aged, especially Diana Kunkelmann, for her tender care and compassion, along with Hospice of Southern Illinois for their amazing support and care.

In lieu of flowers, memorials may be made to Hospice of Southern Illinois, or to the New Athens Home for the Aged. Condolences may be expressed to the family online at www.rennerfh.com.