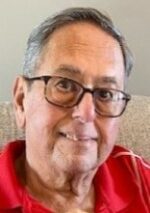 Mr. Fernandez retired as a chemical operator with Monsanto and Solutia after working there for 29 years. He was a loyal member of St. George’s Episcopal Church. He is an Army veteran and received many awards including the National Defense Service Medal, for his skills as a sharpshooter, during his service. On his free time, he enjoyed working with stained glass and watching the Boston Red Sox games.

Jorge was preceded in death by his parents, Manuel and Julia, nee Suerodiaz, Fernandez.

He is survived by his wife of 41 years, Maryann, nee Bifano, Fernandez, whom he married on May 30, 1981; his daughter, Ariana (David) Irby, of Wentzville, MO; a grandson, Everett Irby; two brothers; two sisters; and many nieces and nephews.

Memorials may be made to St. George’s Episcopal Church, Belleville, IL. Condolences may be expressed to the family online at www.rennerfh.com.

Burial will be at St. George’s Episcopal Church Memorial Gardens.