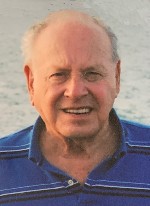 Joe enlisted in the United States Air Force in 1951 and later retired from Scott Air Force Base as a civilian employee. He was an avid piano player and enjoyed playing music in his early years with his combo. One of Joe’s greatest pleasures was time spent watching his grandchildren in their many sporting events.

He was preceded in death by his wife of 63 years, Marilyn, nee Lehman, Delsignore, whom he married on March 15, 1954, and who died on December 18, 2017; a daughter, Tena Doggrell; his parents, Joseph and Tena, nee Mistretta, Delsignore; and two sisters, Delores Powers and Mary DeMaria.

The family would like to thank Hospice of Southern Illinois for the wonderful care given to Joe throughout his illness. The level of care and compassion is immeasurable.