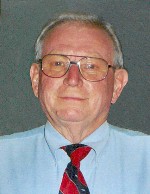 Mr. Emke graduated from Cathedral High School in 1958.  He became a member of District 9 Local 313 Machinists Union on February 5, 1959.  He started working as a mechanic at Nick’s SOS Garage, then moved to Meyer Oldsmobile and retired from Dave Schmidt Truck Service, Belleville, IL in 2002.  He held several offices in the Union over the years.  He received Union Man of the Year in 2004.  He was an avid bowler and loved the outdoors.  He took great pride in caring for his yard and especially enjoyed spending time with his children, grandchildren and great-grandchildren.  He coached baseball and softball for all his children.  He also was a cub scout and boy scout den leader for both of his boys.  Joe was a member of St. Augustine of Canterbury Catholic Church, Belleville, IL.

He was preceded in death by his parents, Joseph Herman and Marie Henrietta, nee Toennies, Emke.

Memorials may be made to St. Augustine of Canterbury Catholic Church and Hospice of Southern Illinois.  Condolences may be expressed to the family online at www.rennerfh.com.

Visitation:  Friends may visit with the family from 4 to 8 p.m. Monday, January 16, 2017, at George Renner and Sons Funeral Home, Belleville, IL.

Our hearts and thoughts are with you during this difficult time. Please know that Joe’s kindness,compassion and spirit will live on through the memories of those who knew and Loved him.
May God Bless .

Art,Carla, and family Steve and I are so sorry for your loss. Our prayers of comfort and sympathy go to you and all your family
Cindy n Steve Crowl

Our thoughts and prayers are with all of you at this time. May God bring you comfort and peace now and in all the days to follow.

May our Lord bless & comfort your family during this time of grief.
Please accept our sincere condolences.