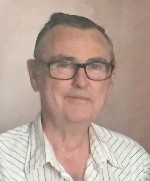 Mr. Gerold was an employee of the Secretary of State of Illinois, working in the DMV office for more than 30 years before his retirement.  He was an avid trout fisherman and enjoyed being outdoors, working in his garden.

He was preceded in death by his parents, Joseph Sr. and Margaret, nee Schlosser, Gerold.

Funeral:  Cremation services were held, and burial will be held at a later date.