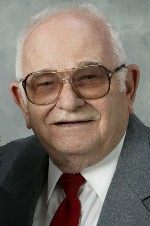 Mr. Schindler was an aircraft maintenance supervisor at Scott Air Force Base before his retirement. He was a member of St. Augustine of Canterbury Catholic Church, Belleville, IL, the Swansea Improvement Association and the VFW # 5165. Mr. Schindler, a United States Marine Corp veteran, served his country in World War II.

He was preceded in death by his wife, Margaret K., nee Welsch, Schindler, whom he married on April 28, 1948, and who died on March 9, 2005; three brothers, Fred, Msgr. Clement, and Raymond Schindler; and four sisters, Loretta Witt, Mildred (Joe) Reeb, Dolores Geolat, and Dorothy (Paul Jean) Christophe.

Memorials may be made to the Esquiline Apartment Community Chapel of Our Lady of the Snows, Belleville, IL, or to the VFW #5165. Condolences may be expressed to the family online at www.rennerfh.com.

Funeral: A Mass of Christian Burial will be held at 11:15 a.m. Wednesday, July 24, 2019, at the Esquiline Apartment Community Chapel of Our Lady of the Snows, Belleville, IL, with Rev. Joseph Ferraioli, OMI, officiating.