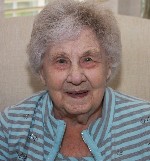 Print Obituary
On the morning of July 16, 2022, Joyce Andrews, of Smithton, passed away at the age of 97 at Freeburg Care Center.  Joyce was born to Mabel and Edward Schultz in Chicago, Illinois.  She married Donald Andrews in September 1946 and together they raised three children, Donna, Janet and Gregory.

During the early years of their marriage, they moved frequently due to Don’s work with Honeywell, Inc.  No matter where they lived, Joyce made a wonderful, happy home for her family.  She was actively involved in her children’s activities and attended many t-ball and baseball games and served as a Brownie and Cub Scout leader.  She was an active member of Memorial Hospital Auxiliary and made floral arrangements for the gift shop with a special group of ladies.  After 35 years of living in Belleville, Don retired in 1994, they moved to Sebring, Florida. Living with a golf course in their backyard, she played golf with Don and with a group of her many friends.  Joyce returned to Illinois, after Don’s passing in 2009 to be closer to family.  She settled in Smithton and spent her remaining years close to her children.  She spent many hours making personalized greeting cards to the delight of the recipients.

In lieu of flowers, memorials may be made to St. John the Baptist Catholic Church, Smithton, Illinois, to Shriner’s Hospital for Children, or to Freeburg Care Center, Freeburg, Illinois. Condolences may be expressed online at www.rennerfh.com.