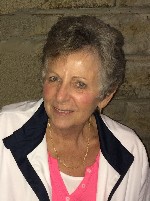 Judy graduated from Barnes School of Nursing.  She enjoyed playing bridge, traveling, watching Cardinal Baseball games, and spending time at the clubhouse with family.  She was a member of Immaculate Conception Catholic Church.

She was preceded in death by her father, John Strobl; her mother, Alma, nee Mileur, Strobl Schindler; her stepfather, Raymond Schindler; and two sisters-in-law, Sandy Strobl and Bonnie Gundlach.

She is survived by her husband of 53 years, Joseph Gundlach, whom she married on October 9, 1965;
two daughters, Laura Pratl (Tim Gorman),
and Christy Gundlach;
two grandchildren, John Pratl and Katie Pratl;
one brother, John Strobl;
two brothers-in-law, Tom Gundlach,
and Dick (Kathy) Gundlach;
one sister-in-law, Janet (Bill) Stumpf;
and many nieces and nephews.

Memorials may be made to Immaculate Conception Catholic Grade School, to Althoff Catholic High School, or to Hospice of Southern Illinois.   Condolences may be expressed to the family online at www.rennerfh.com.

Private family burial will be held at a later date.