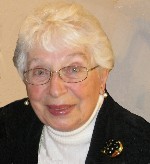 Print Obituary
Justine Viviano, nee LoGrasso, 95, of Belleville, Ill., born August 23, 1923, in Terrasini, Province of Palermo, Italy, fell asleep into the arms of our Lord on Thursday, February 14, 2019, surrounded by her loving family.

Justine arrived in America with her parents from Italy when she was 4 years old. After graduating from St. Alphonsis “Rock” High School in St. Louis, she excelled as an executive secretary at Bank of St. Louis, Valley Steel Products Company, and Mercantile Bank. Justine was an active member of St. Teresa’s Catholic Church, Belleville, Ill. since 1956, and served as Eucharistic Minister both at St. Teresa’s Church and at St. Elizabeth’s Hospital, Belleville, Ill. She was a member of Young at Heart and Legion of Mary at St. Teresa’s parish and she was a 75-year member of St. Peter’s Chapter of the secular Franciscan Order, Belleville Chapter of the Daughters of Isabella. She was one of the last two surviving members of a 50-plus year pinochle club. Justine’s driving force throughout her life was her dedication to Our Lord. One of her life’s highlights was hosting a Rosary Rally at her home in 2014, with an overflowing crowd of 80 family and friends led by her parish priest. Her unwavering faith, example, and devotion to God made her an invaluable role model and inspiration to everyone she met.

Justine truly relished her role as co-owner of Viviano’s Italian Restaurant, Belleville, Ill. for almost three decades, working with her husband John, children, and grandchildren, where she was known as the treasured “Mrs. V” and “Belleville’s Hostess” by the restaurant’s beloved employees and customers. At the restaurant and at family gatherings, she often delighted everyone by singing her sweet animated renditions of “Five Foot Two, Eyes of Blue,” “Has Anybody Seen My Gal?” and “Ain’t She Sweet,” accompanied by the restaurant pianist.

Justine was preceded in death by her husband of 39 years, John P. Viviano, who she married on February 15, 1947 and who died on October 27, 1986; two daughters, Jacqueline Davis and Joyce Ellen Viviano; her parents, Joseph and Serafina LoGrasso; two brothers, Anthony LoGrasso and Russell LoGrasso; and a great-great-grandson, Henry Benjamin McGee.

Memorials may be made to St. Teresa’s Catholic Church or in the form of Masses. Condolences may be expressed to the family online at www.rennerfh.com.

Funeral:  A Mass of Christian Burial will be celebrated at 11 am, Tuesday, February 19, 2019, at St. Teresa Catholic Church, Belleville, Ill., with Monsignor David Darin officiating.