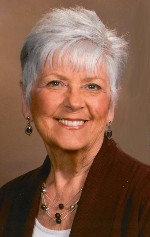 Karen was born in the little town of Spring Valley, IL, on her brother Chuck’s birthday… a sweet present but not exactly the bicycle he expected.  After graduating from Hall High School, she worked as a legal secretary, and fate seemed to step in when she met a young law student, Ralph, at a summer dance in neighboring LaSalle, IL.  Embarking on a journey to Southern Illinois where Ralph established his law practice, Karen embraced her true calling, the role for which she was born and the role she enjoyed most–mother.  At times she seemed like a kid herself, playing games, jumping rope, or reading comics with her children.  She was always ready to volunteer at St. Augustine and served as a Brownie leader and Cub Scout den mother and helped with the baton team and worked in the school library.

As her children grew, she proudly returned to her career as a legal secretary, acting as Ralph’s ‘Girl Friday’.  At an age where others might have slowed down, she seemed to do more, especially after being blessed with five grandchildren in four years.

While others might enjoy the lights of Broadway, Karen’s favorite shows were the recitals, musicals, and sporting events where her grandchildren were the stars. While others retire to travel the world, her most cherished trips were with her grandkids to Disney World and spending lazy days with them on a Gulf beach.

As she fought cancer, Karen always had the goal of seeing her grandchildren graduate school, marry and start their lives. Though it may not be here on Earth, she will be watching, her smile beaming from Heaven.

She is rejoined those who went before her, bringing the brightness of her smile back to her loving husband of 57 years, Ralph John Derango Jr.; her parents, Carl and Alma, nee Lust, Peterson; big brother, Charles “Chuck” Peterson; and little brother, Albert “Big Al” Peterson.

In lieu of flowers, the family asks that you make a memorial donation to St Jude’s Children’s Hospital. https://www.stjude.org/give.html. Condolences may be expressed to the family online at www.rennerfh.com.

Visitation:  Visitation will be held from 10:30 a.m. to 12:30 p.m. Saturday, January 23, 2021, at George Renner & Sons Funeral Home, Belleville, IL. Standard CDC guidelines, including masks and a limited number of visitors at any one time will be observed.

Private family burial will be at a later date.