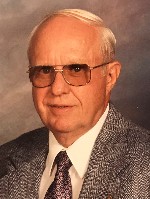 Mr. Stegman was a hard-working Navy veteran, engineer, electrician, and school bus driver, who was appreciated by many Belleville students and parents.

A lifelong Belleville resident, he graduated from Signal Hill Grade School, Belleville Township High School, and Belleville Junior College. Later in life he went on to pursue a degree in Mathematics and Computer Science from Washington University in St. Louis. Upon graduation from BJC, he was inducted into PHI THETA KAPPA National Scholastic Honorary Society.  He was an avid motorcycle rider, golfer, dog lover, and antique radio collector and repairman.

Karl served his country in the United States Navy in World War II.  He then served southern Illinois as a lineman for Illinois Power from 1951 – 1963.  During his time at Illinois Power, he attended night school at BJC and Washington University St. Louis.  He was a senior loft engineer and senior programmer for McDonnell Douglas in St. Louis, MO, from 1964 – 1987. While at McDonnell Douglas, he did the mathematical definition of the fuselage on the F-15 aircraft.  When McDonnell Douglas was subcontractor to North American Aviation, Karl did the definitions on the Space Shuttle 2’s main engine pods and the structure for the Orbital Maneuvering System.  Upon retirement in 1987, Karl volunteered in the PSOP Meals on Wheels program.  Karl then served Belleville students and families for 13 years as a caring bus driver in the Harmony Emge Ellis District 175 and Durham School Services.

As a member and past president of The Exchange Club of Belleville, Karl enjoyed working weekly bingo sessions and the annual Easter egg hunt. Karl was a faithful member of Zion Lutheran Church in Belleville, where he married his wife Arlene Nollau in 1951.

He was preceded in death by his parents, Jacob and Erna, nee Mueller, Stegman; and two brothers, John and Jacob “Jay” Stegman.

In lieu of flowers, memorials may be made to Zion Lutheran Church or to the Belleville Area Humane Society. Condolences may be expressed to the family online at www.rennerfh.com.

Burial will be held at a later date at Valhalla Gardens of Memory, Belleville, IL.