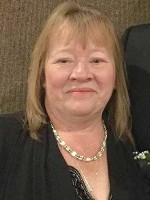 Katherine worked for Walmart for over 40 years and retired as a District Assistant. She loved playing cards, traveling, and attending her grandchildren’s dance activities.

She was preceded in death by her first husband, Brad Delaria, Sr; and her parents, Robert E. and Shirley Jean, nee Allen, Powers;

In lieu of flowers, memorials may be made to the American Lung Association. Condolences may be expressed to the family online at www.rennerfh.com.