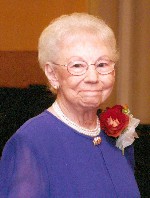 Mrs. Klinkhamer worked for Sears Roebuck and Company for 17 years and was a member of the Sears retiree club.  A member of St. Luke’s Catholic Church, Katherine belonged to the Ladies Sodality and the quilters group.  She enjoyed volunteering with the Ministry to the Sick and Aged for the Belleville Diocese.  She belonged to the Catholic War Veterans Auxiliary where she held both local and state offices.

Katherine was preceded in death by her husband of 41 years, Robert M. Klinkhamer, whom she married on September 16, 1943, and who died on May 22, 1985; one daughter, Mary K. Lappin; her parents, William N. and Bertha H., nee Keuhn, Blaes; one brother, Paul (Mary) Blaes; one sister, Marcella (Albert) Loesch; one sister-in-law, Joan Blaes; and one brother-in-law, Donald Klingler.

Memorials may be made to the Ministry to the Sick and Aged.  Condolences may be expressed to the family online at www.rennerfh.com.

I’m so sorry for your loss. I quilted with Katherine and knew her from St. Luke’s. She was so special to so many. She will be missed.