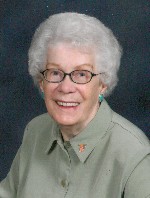 Mrs. Hoerner grew up in Detroit, MI.  She worked for Massachusetts Bonding and Insurance prior to her first marriage.  Kay, along with her second husband, Eddie, were the owners and operators of the former Kay’s Gifts and Toys and The Mall Bar and Restaurant, both in downtown Belleville.  She was a member of the Gold Star Wives of America and a charter member of World War II Memorial in Washington D.C.  She belonged to the Beta Iota Chapter of Epsilon Sigma Alpha International Sorority. Kay enjoyed her Mary Rose Grant’s exercise class at Nicholas Center for 15 years he belonged to the St. Elizabeth’s Hospital Auxiliary and was a long-time member of St. Peter’s Cathedral, Belleville, IL.

She was preceded in death by her first husband, Arthur Blackwell, who died on October 4, 1944 during World War II; her second husband of 32 years, Edward Hoerner, whom she married on June 18, 1946, and who died on June 26, 1978; one daughter, Linda Kay Hoerner; one son, Dennis E. Hoerner; her parents, Joseph and Catherine, nee Daly, Wiethoff; two brothers, Joseph “Bud” Wiethoff and Donald Wiethoff; and one sister, Marie Ann Beggs.

Thank you to the care-givers at Fountains of Shiloh for the love they gave.

Memorials may be made to Lurie Children’s Hospital, Ben’s Chocolate Stand, Chicago, IL.  Condolences may be expressed to the family online at www.rennerfh.com.