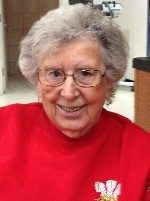 Lorene, as she liked to be called, worked in the accounting office and specifically in the payroll department of Nooter Boiler Corporation, St. Louis, MO. She retired in 1965.  Outside of work, Lorene had been very active and played in several organized sports including softball and bowling leagues with her friends at Nooter.  Later in life, Lorene and her girlfriends traveled across the United States, Europe, Australia, and New Zealand.

Funeral:  A private graveside service was held Saturday, January 9, 2021, at Lake View Memorial Gardens, Fairview Heights, IL, where she was put to rest alongside her husband and son.

A memorial service will be held at a later date.