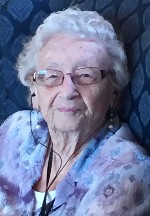 Kathryn “Kay” was a dedicated mother to her large family.  She was a member of the Murray Development Center Parents Association and was a board member at St. Clair Associated Vocational Enterprises (S.A.V.E.), and numerous organizations for the handicapped.  Kathryn was a parishioner of St. Augustine of Canterbury Church and St. Mary Catholic Church. She served as an officer in the Ladies Sodality, and as a lector and Eucharistic Minister.

Kathryn was preceded in death by her husband of 53 years, Melvin G. Munie whom she married on October 23, 1948, and who died on September 9, 2002; her dear daughter Angela Merici Munie; a sister, Frances Cooney; and two brothers, Edward and Thomas Cooney.

Memorials may be made to Murray Parents Association, in care of Rita Winkler, 1535 West McCord, Centralia, IL, 62801, to Rett Syndrome at www.rettsyndrome.org or to the charity of the donor’s choice. Condolences may be expressed to the family online at www.rennerfh.com.

Funeral: A Mass of Christian Burial will be held at 9:30 a.m. Friday, December 18, 2020, at St. Augustine of Canterbury Catholic Church, Belleville, IL.