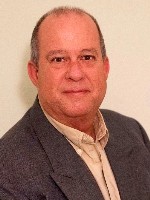 Mr. Likes was an avid hunter, angler, golfer, painter, graphic designer, father, grandfather, and uncle. Kelly was born in the early 60’s in Belleville, IL to Leo H. Likes (architect) and Doris Amelia Amanda Kuhlman Likes (executive asst.), graduated from Belleville East in 1980 and Bellville Area College in 1984, worked in advertising during the 90’s and 2000’s.

Mr. Likes shared a unique perspective on the world which he showed through his artwork. He could usually be found fishing at a local Anglers Club or out hunting at a friend’s property. He loved to talk about music and expressed the importance of it. Kelly’s sense of humor attracted all kinds of people and will be a lasting memory to those he was close with. During October of 2018 his fight with brain cancer began, and in the last six months he went through focused radiation and chemo at Saint Louis University Hospital. While he passed at an early age, a lifetime of lessons were taught to his children and many others.

Kelly was preceded in death by his father, Leo Hale Likes; and his mother, Doris Amelia Amanda Kuhlman Likes.

Surviving are his son and daughter; Curtis Likes of St. Louis, MO, and Rachel Likes of Knoxville, TN; one grandson, William Leo Hornsby of Knoxville, TN; two brothers, Chris Likes of Alton, IL, and Scott Likes of Collinsville, IL; many friends around the Belleville and St. Louis area; many fish in the ponds; and many golf balls in the woods.

He will be missed.

Funeral:  A small service was held for immediate family. Given the pandemic, a memorial will be held at a later date.

“All along this path I tread, my heart betrays my weary head, with nothing but my love to save, from the cradle to the grave.” -Eric Clapton