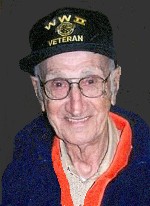 Mr. Hickman had worked as an upholsterer at Belleville Casket Company, was the owner operator of the Derby Gas Station in Belleville, IL, and later drove a school bus and served as a crossing guard.  At the age of 50, he became an ordained minister.  Kelsey was a World War II U.S. Army veteran.

He was preceded in death by his wife of 65 years, Dorthy M. Hickman, nee Pfeaster, whom he married on February 24, 1945, and who died on January 26, 2011; two sons, Kelsey W. and Robert Hickman; his parents, Robert and Lura, nee Wildman, Hickman; four brothers, Robert, Kenneth, Elliott, and Clarence Hickman; two sisters, Dorothy Davis and Mildred Fenoglio; and a brother-in-law, Merle Pfeaster.

Memorials may be made to the Honor Flight Network or to the Patriot Guard Riders.  Condolences may be expressed to the family online at www.rennerfh.com.

Sorry to hear of Uncle Kelsey’s passing. The Hickman aunts and uncles are just going too fast. I know Mom (Belle Hickman) will be saddened by this news. I’ll always remember the great picnics in the summer with all the relatives.
Jacqueline

Belleville VFW Post 1739 and I would like to give our condolence to your family Kelsey. We thank you and your family for yours and their service to our country and your support of our veterans.