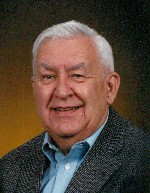 Mr. Dressler worked in civil service for the Department of Defense for 34 years before his retirement.  He proudly served in the United States Air Force for 4 years during the Korean war.  Ken was a member of St. Henry’s Catholic Church, Belleville, IL for 55 years, a past officer of St. Henry’s Mens’ Club and past president of St. Henry’s Transportation Association. He was a past officer of the Althoff Fathers’ Club and a past member of the Althoff bingo committee, where he volunteered for 40 years.  Ken was a lifetime member of Butz Jobe Catholic War Veterans, a lifetime member of Knights of Columbus Council 1028, and a member of AARP, NARFE and Catholic Fraternal Life.  Mr. Dressler spent time volunteering for both Senior Citizens, and Meals on Wheels.  In his spare time, Ken enjoyed building models of aircraft, helicopters and ships.

He was preceded in death by his first wife, Mary Jean, nee Rinck, Dressler, whom he married on June 20, 1953, and who died on May 5, 1993; his parents, Stephen and Edna, nee Waigand, Dressler; a granddaughter, Allison Renner; two brothers, Earl “Hap” Dressler, and Marvin Dressler; and a sister, Ethel Gross.

The family wishes to express a special thank-you to the staff at Memorial Hospital East and to Rev. Kenneth York for their loving care and support.

Memorials may be made to Althoff Catholic High School, St. Henry’s Catholic Church, or to the Belleville Area Humane Society. Condolences may be expressed to the family online at www.rennerfh.com.