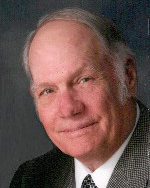 Kenny was a loving husband, father, grandfather and friend who enjoyed music, sports and sharing a laugh with family and friends. He was a current and founding member of the Metro East Chorale, SIU-E Community Chorus and a member of the St. Peter’s Cathedral Church and Men’s Choir for over 50 years. He was a gifted soloist who shared his voice at countless concerts and weddings throughout the years. He was a member of the Cathedral Players Guild. Kenny had several professions over the years including manager of the Penney’s Shoe Department in downtown Belleville and as a route salesman for both Wonder Bread and Frito Lay. In his younger years, Kenny played baseball, softball, volleyball, was an avid bowler and golfer, and was a long-time coach and umpire. His love of sports carried over into his retirement years with a job as an usher for 18 seasons with the St. Louis Cardinals.

He was preceded in death by a son, Clif Metze; his parents, Theodore H. and Irene, nee Spinnenweber, Metze; a brother, Jerry Metze; and a brother-in-law, Linus Poettker.

The family would like to express a special thanks to Family Hospice for their care.

In lieu of flowers, memorials may be made to Family Hospice or to the Cathedral Athletic Club. Condolences may be expressed to the family online at www.rennerfh.com.

Visitation:  A memorial visitation will be held from 4 to 8 p.m. Friday, February 2, 2018, at George Renner & Sons Funeral Home, Belleville, IL.

Funeral: A Mass of Christian Burial will be held at 10 a.m. Saturday, February 3, 2018, at St. Peter’s Cathedral, with Msgr. John Myler officiating.

Private interment will be held at Green Mount Catholic Cemetery, Belleville, IL, at a later date.