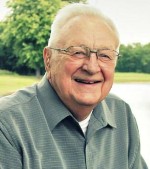 Kenny was an avid hunter and fisherman who loved the outdoors.  He was a member of the Quail Club, a proud member of the NRA, and was a former member of the Monroe County Deer Club.  Ken played fast-pitch softball at South Side Park in Belleville with the Bridges and Ward team for many years.  A U.S. Navy veteran of the Korean war, he served on the USS Yorktown CV-10 and the USS Kearsarge. Following his time in active service, Ken worked at Scott Air Force Base as an aircraft mechanic and went on to work as a civil service employee in St. Louis until his retirement in 1985. He was a long-time member of Christ United Church of Christ, Belleville, IL. Kenny always had a quick wit and was able to keep his sense of humor until the end. His favorite anecdote was “into everyone’s life a little rain must fall.”

Preceding him in death are his parents, Albert Theodore and Irma Mathilda, nee Neudecker, Bruckner.

Memorials may be made to Christ United Church of Christ, to the Quail Club, or to the charity of the donor’s choice. Condolences may be expressed to the family online at www.rennerfh.com.

Burial with military honors will be held at Highland Cemetery, Highland, IL.