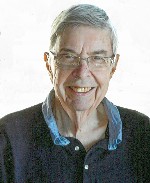 Mr. Oesterle was a graduate of Belleville Township High School and Belleville Junior College. He worked at St. Clair National Bank and retired as a senior vice president of the former Bank of Belleville, Belleville, IL.  Ken was a faithful, life-long member of St. Paul United Church of Christ, Belleville, IL, and served on the St. Paul Senior Community Board.  He enjoyed singing with the church choir for more than 60 years and belonged to the Barbershop Harmony Society.

Ken was an active member of the Westside Belleville Optimist Club for over 50 years. He served on the High Mount School Board and the Swansea Parks and Recreation Board. Ken enjoyed all sports and especially enjoyed meeting “the guys” at Bread Co and hosting poker games in his basement.  He was a veteran of the U.S. Army National Guard.

He was preceded in death by his first wife, Evelyn J., nee Sauer, Oesterle; his parents, William and Katherine, nee Habelrauth, Oesterle; and his father-in-law and mother-in-law, Eugene and Helen Dahm.

Memorials may be made to St. Paul United Church of Christ, Belleville, IL, or to the Westside Optimist Club. Condolences may be expressed to the family online at www.rennerfh.com.

Private funeral services will be held. Burial of cremains will be at Lake View Memorial Gardens, Fairview Heights, IL.