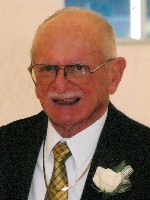 Kenneth worked on the family farm for many years and at Scott Air Force Base in civil service for 30 years before retiring in 1994.

He was a longtime parishioner at St. Teresa Catholic Church in Belleville, IL, where he was a member of the Holy Name Society, the Young-at-Heart Club, and served a term on the parish council.  He was also a member of the O’Fallon Knights of Columbus, the St. Clair County Farm Bureau, and the Belleville-Swansea Moose Club.

Kenneth was a faithful donor for the American Red Cross.  While he was able, he donated over 20 gallons of blood and received the Life Saver Award in recognition of this achievement.

Kenneth overcame many obstacles in his life, beginning with polio at the age of 3.  The effects of the virus continued to plague him through the years, but his resolve to live a full life and provide for his family never wavered and has served as an excellent example to us all.  His work ethic was unmatched.

The Thouvenot family would like to give special thanks to the staff at Rosewood Care Center for their care, support, and concern.

Memorials may be made to St. Teresa Catholic Church or to Hospice of Southern Illinois.  Condolences may be expressed to the family online at www.rennerfh.com.

Please accept our deepest condolences on the passing of Kenneth. It was an honor to have known him and have him as our neighbor. We will truly miss him. May our Lord bless and comfort you and your family during this time of grief. You are in our thoughts and prayers.

Aunt Lydia Ken,Joyce,Russ,Jerry, Steve, Diane and Lynn so sorry to hear about Uncle Kenny, he was a good man and I was alwys proud to call him Uncle Kenny. I remember the trips to your house going for Pony rides and walking up to the Thouvenot farm. Mom always appreciated “Kenny” watching out for her kids at the farm in Trenton. So sorry I cannot make it to the Funeral Home you will all be in my thoughts and prayers.

To the Thouvenot Family
You have our sincere sympathy. We hope that the memories you have of your hudband, dad, grandfather and great-grandfather will always leave a smile in your face and a warm spot in your heart.

Sympathy to the family of Ken. Was so surprised to see the BND obituary and sorry I could not make the visitation. To his wife Linda, you do remember me as a classmate in high school in Aviston.
I was so interested in your husbands health since I too had polio at the age of 3 yers. Remember talking to your husband about our simularities of the illness. Prayers to you and your family at this time of your loss.