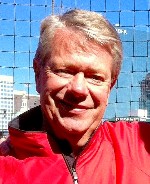 Lawrence was known as “Larry” to most. He was known as “dad” to a few, but his most cherished title of all, was “Pop” as he was known by his beloved grandchildren. He served in the National Guard, was an Eagle Scout, and worked as an oil trader for over 40 years. On the day he retired he set off fireworks in his driveway. Larry was a master of many things: his yard, Christmas lights, DIY, debating, and golf (especially putting). He was a generous man who would help you whether you wanted it or not, he was a man who ‘saved the day’ for so many, was always willing to help (or take over) any project, a hard worker, smart, able to cry and show emotion, and was a loving provider for his family. Larry had an unquestionable love for his family and friends—at the top of his list was his wife of 50 years.

He was preceded in death by his parents, Lawrence and Jane, nee Langsdorf, Altmansberger;  a brother, Jack Altmansberger; his in-laws Norbert and Lorna Wolf; and his brother in-law, Randy Duncan.

The family would like to thank Larry’s doctors who took such good care of him over the years. We are forever grateful to Dr. Alan C. Braverman, Dr. Matthew J. Walter and Dr. Beatriz Ramos-Pardo.

Memorials may be made to the American Cancer Society, to the American Heart Association, the Leukemia & Lymphoma Society, or to St. Jude Children’s Research Hospital. Condolences may be expressed to the family online at www.rennerfh.com.

A celebration of his life will be scheduled at a later date.