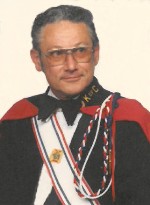 Larry had worked as a salesman and retired from Purcell Tire and Service Center. He was a member of Holy Trinity Catholic Church, Fairview Heights, IL. Larry had been a member of the Knights of Columbus Council 1028 since the age of 18. He had served as a past Grand Knight, a Faithful Navigator, and member of Assembly 199. Larry had also been a former 4 year Master of the Fourth Degree Southern District of Illinois, and former District Deputy. In his retirement he enjoyed feeding the birds, watching Cardinal baseball, spoiling his granddaughter, and eating out. Larry was a member of the Illinois National Guard. He loved taking care of his children and granddaughter.

He was preceded in death by his parents, Rudolph and Helen, nee Mayer, Conrad; and a brother, Walter J. Conrad, Jr.

He is survived by his wife of 57 years, Dolores J., nee Holle, Conrad, whom he married at the Cathedral of St. Peter, on May 8, 1965; a son, Anthony E. Conrad of Larkspur, CO; a daughter, Angela J. (Craig) Siman of St. Charles, MO; and a granddaughter, Jenna N. Siman.

Memorials may be made to The National Pancreas Foundation or to Holy Trinity Catholic Church. Condolences may be expressed to the family online at www.rennerfh.com.