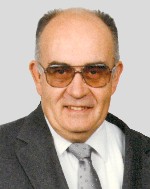 After graduating from Centralia High School, Larry joined the United States Air Force where he served for 21 years, including a tour in Vietnam.  He retired in 1978 as a Technical Sergeant. During his military career, he earned his Bachelor of Science in Occupational Education from SIU-Carbondale and an Associate of Arts in Computer Technology through the Community College of the Air Force.  After leaving the Air Force, he trained on various nuclear and electronic medical diagnostic equipment.  He spent more than 15 years as a service engineer and manager for leading companies in the electronic medical diagnostic field, eventually retiring from ADAC Laboratories.

Larry spent his free time with family and friends, especially his wife and children.  He was the best father and husband he could be. He enjoyed volunteering and was an active member of the Masonic Order with the Belleville, Lebanon, and Mascoutah lodges, and Knights Templar with the Belleville and Lebanon Lodges.  He was a past patron of Eastern Star and a member of the Belleville Area High Twelve.  An active Republican, he proudly served as precinct committeeman for St. Clair County.  He was a life member of VFW Post 8547 in Edgemont, CA. Above all, he was a farm boy at heart.  No matter where he lived, he always had at least a half-acre vegetable garden.  He was happiest driving a tractor. He loved tractor pulls, the Mascoutah Homecoming, and hosting family reunions.

Larry was preceded in death by his wife of 35 years, Robin A., nee Titus, Hoercher, whom he married on March 24, 1974, and who died on January 29, 2010; his father, Clyde Hoercher; his mother and step-father, Juanita, nee Whittenberg, and Morris Satz; a grandson, Ian Sean Stogner; and a beloved cousin, Kenneth Hoercher.

Memorials may be made to the American Diabetes Association or to the Knights Templar Eye Foundation, Inc.  Condolences may be expressed to the family online at www.rennerfh.com.

Funeral:  Funeral services will be held at 7 p.m. Sunday, February 28, at the funeral home, with Rev. Vance Veyers officiating.  Burial with military honors will be Monday, February 29, at Richview Cemetery in Washington County, IL.

I only saw a year or two of Larry’s corn field, though I remember him talking of his raspberries; and container gardening on your deck. Farmer Larry, years after he could no longer drive a tractor! I have fond memories of Larry cruising down our road, even when it was in very poor shape, to get out and say “hi” to folks. I will always remember Larry and Robin – so welcoming and friendly. Thanks for the memorial info – a donation will be made in Larry’s name. May they rest in peace, together again.