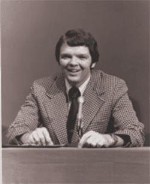 Wrestling was not his only love. For many years he was the Committee Chairman for the Elks/Multiple Sclerosis Sports Celebrity Dinner held at the Chase Park Plaza Hotel, where he worked with Jack Buck and Bob Costas.

He was also involved in area youth sports. He was on the Board of Directors for the Gateway Region of USA Volleyball and founded and managed his own volleyball club, Belleville Momentum. In 2002, he received the Robert L. Lindsey Meritorious Service Award for “outstanding participation, motivation, and other services in the promotion of volleyball.” Likewise, he was coach of The Renegades, a girls’ softball team that played in both Illinois and Missouri.

Besides sports, Larry was active in a variety of other areas. He was a ham radio operator and worked with the St. Clair County/Belleville Emergency Services and Disaster Agency. He was head of the Belleville Auxiliary Police for a number of years as well.

Over the years, he received many honors both in and out of sports. The City of Belleville honored him for “25 years of service and dedication” to communication for the Emergency Services and Disaster Agency from 1958 to 1983.  St. Clair County Civil Defense recognized him for his volunteer services in Radio Communication. In 1983, then Mayor Richard Brauer issued a Proclamation citing Larry as “an outstanding citizen of Belleville” and one who “has brought great credit to himself and the city of Belleville.” Likewise, he was honored by the City of Belleville and the Belleville Police for “his loyal and dedicated service and devotion from 1968 to 2007.”

His most recent honor came on May 17 this year when County Board Chairman Mark Kern proclaimed it “Larry Matysik Day in St. Clair County.”

He was preceded in death by his mother, Corrine Matysik (nee Nolte), his father Edwin Matysik, and his father-in-law Arthur Mattingley.

In lieu of flowers, memorials may be made to Habitat for Humanity or Hospice of Southern Illinois. Condolences may be expressed to the family online at www.rennerfh.com.

Visitation:  An informal celebration of Larry’s life will be held at George Renner and Sons Funeral Home in Belleville from 4:00 to 7:00 on Sunday, December 2, 2018.