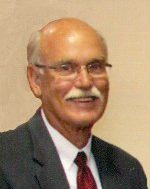 Larry was a 1968 graduate of Althoff Catholic High School. He attended Benedictine College, Atchison, Kansas, where he earned a Bachelor of Science in Business Administration. From 1985 to 1988, he attended graduate school at the American Institute of Banking in Boulder, Colorado. Larry had over 35 years of experience in the banking industry and retired from 1st National Bank of Waterloo in 2015, where he was a current board member. He was a former board member at 1st National Bank of Millstadt.  Larry earned a certificate in Secondary Business Education at St. Edwards University, Austin, TX.  He taught at Austin State Hospital and St. James and Freeburg High School.  He was the original “Cheese Keeper” owner, which he opened in 1980 in the Arcades.

Larry loved his family dearly.  He was a man of great integrity and sincerity, always ready to give a compliment and guidance.  Larry was a dear friend to so many and loved to laugh and have fun.  He enjoyed golf, biking, daily walks, and his trips to Arizona.

He was preceded in death by his parents, Lawrence and Dorothy, nee Mease, Hoff; his father-in-law and mother-in-law, Arthur and Viola, nee Kurtz, Biver; and brother-in-law, William Biver.

Larry will always be loved by his wife and high school sweetheart, whom he married on May 5, 1972, Teresa, nee Biver, Hoff.
He lives on through his children, Emily (Christopher) Scott, Elizabeth (Ryan) Lee, and Larry Hoff.
Grandpa Larry will be sadly missed by his five grandchildren, Elleanor, Sophia, Nicholas, Mia, and Ben.
His memory will be cherished by his siblings, Mary Pat Bollone, Robert (Bev) Hoff, George (Gale) Hoff, Peggy (Ron) Vallandingham, and Andy (Joice Schmitt) Hoff;
and many nieces, nephews, cousins, and beloved in-laws, Carole Biver, Mary and Tom Dewein, Tom and Sandy Biver and John Biver.

In lieu of flowers, memorials may be made to Benedictine College in Atchison, KS, or to the American Cancer Society.  Condolences may be expressed to the family online at www.rennerfh.com.