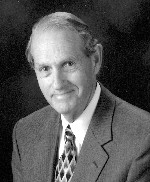 Mr. Twigg worked his whole life in the “shadow” of the Catholic Church.  He attended St. Henry Seminary, Belleville, IL, followed by Maryknoll Seminary, earning a degree in Philosophy.  Drafted into the U.S. Army during the Korean War, he served 18 months in Seoul as a Chaplain’s Assistant.  He began his career working for a firm that conducted capital fund programs.  In 1959 he organized his own firm, Lawrence Twigg & Associates.  His 40 year career involved programs in more than 800 parishes in 21 Dioceses.  His firm raised the funds for the construction of Althoff Catholic High School.

During his retirement, he served as a Eucharistic Minister to patients in Memorial Hospital and the homebound.  Several times a month, he and his wife prepared and served meals for the homeless and poor.  He will always be remembered for his generosity and service to others by distributing home baked cookies and beautiful roses from his garden.

He was preceded in death by parents, Charles and Rose, nee Mattingly, Twigg; his sister, Theresa Sautman; his brother, Robert Twigg; two brothers-in-law, Donald Beck and Victor Vergara; and one sister-in-law, Mabel Twigg.

Lawrence truly lived life to the fullest with simple pleasures, loving his friends and family while walking side by side with God.

In lieu of flowers, memorials may be made in Lawrence’s name to the Autism Foundation or to the Alzheimer’s Association.  Condolences may be expressed to the family online at www.rennerfh.com.

So sorry for your loss. He is at peace after all of his hard work. God Bless You and your family.

I will always remember the times Uncle Larry schooled me and my friends, plus my brothers and I, in basketball. God’s Speed Uncle Larry.

Linda & Jim,
I am so sorry for your loss. Please accept my sympathy, and that of the entire Richard & Joyce Arnold family.

So many fond memories of Uncle Larry & the summers in Frankfort, MI and Crystal Lake……
My love goes out to all of you at this time.

Truly a good man and a great friend. My prayers at Mass and Liturgy of the Hours will include remembrances of him and of all of you, his family. God bless. Fr. Charles

Uncle Larry,
You will be missed… To my Aunt and cousins, remember that we love and care about you.

Our prayers and thoughts are with you at this sad time.

We fondly remember our trip to Frankfurt, MI in 1957 and the fun we had at our parties.

Sending my deepest sympathy to you and your family. I remember fondly many years babysitting for your children in my teen years. Mr. Twigg was a wonderful man and will be missed greatly by the entire Catholic community of Belleville.

Dear Ana and family
I was so sorry to hear about Larry’s passing. I was scheduled for an emergency out-of-town(Chicago and Rockford) job which I just could not get out of. I know Larry would understand, since we were both in business for ourselves. Gosh, so many memories of you guys and mom and dad, Crystal lake, and all of the good times we all had. I know Janet was there and we both send our prayers. Thank goodness Larry took the path he did because he touched so many lives and was such an asset to the Church. I know he was the reason Dad went into his most rewarding career. He loved doing what he did for the last 25 years of his life, and I thank Larry for that. May God bless you and your family.