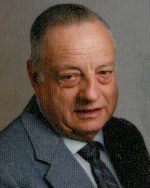 Print Obituary
Leander L. Gaertner, 93, of Belleville, IL, born November 2, 1923, in Evansville, IL, died Sunday, August 6, 2017, at the Dammert Center at the Shrine of Our Lady of the Snows, Belleville, IL.

Leander served in the U.S. Army Air Force during World War II from 1943 to 1946.  He later worked as a civilian for the U.S. Army Aviation Systems Command as a logistic management specialist, and retired after 32 years.  He also served as a boy scout leader for many years.

He was preceded in death by his wife of 65 years, Angeline J., nee Gross, Gaertner, whom he married September 29, 1948, in Chester, IL, and who died January 11, 2014; his parents, Lawrence and Susanna, nee Hess, Gaertner; and three brothers, Lawrence, Paul, and Norman Gaertner.

Memorials may be made to Hospice of Southern Illinois or to the Apartment Community at the Shrine of Our Lady of the Snows.  Condolences may be expressed to the family online at www.rennerfh.com.

Visitation:  Friends may call from 10 to 11:15 a.m. Wednesday, August 9, 2017, at the Shrine of Our Lady of the Snows Apartment Community Chapel, Belleville, IL.