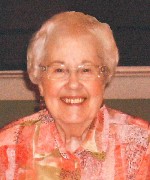 Mrs. Hartman was a homemaker.  She also was a switchboard operator for Shell Oil Refinery in Roxana, IL before her marriage.

She was preceded in death by her parents, Lawrence L. and Isabelle, nee Seemes, Schade; her first husband, Paul Stolze, whom she married on April 25, 1940, and died on July 30, 1970, and one brother, Norbert Schade.

She is survived by her husband Robert J. Hartman, whom she married on February 21, 1976;
one daughter, Mary Ann (Richard) Noce of Aurora, IL;
three stepsons, Michael (Janet) Hartman of Evansville, IN,
John Hartman of New York, NY, and Daniel (Shannon) Hartman of Seabrook, TX;
two stepdaughters, Ann (Steve) Stolte of Edwardsville, IL and
Jane (Russell) Twaddle of Columbus, IN, 14 grandchildren, and 8 great-grandchildren.

Memorials may be made to Family Hospice of Belleville, IL or the American Heart Association.   Condolences may be expressed to the family online at www.rennerfh.com.

Funeral:  A Mass of Christian Burial will be held at 11:15 a.m. Saturday at the Shrine Apartment Community Chapel, Belleville, IL, with Fr. Joseph Ferraioli officiating.  Burial will be at Calvary Catholic Cemetery, Edwardsville, IL