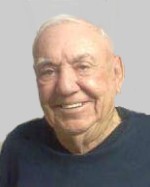 Mr. Dooley retired from Ameritech Telephone Company.  He was a member of St. John the Baptist Catholic Church, Smithton, IL, and the Holy Name Society at the church.  He was also a member of the Smithton Commercial Club, the Smithton Senior Citizens, the 76’ers Club, and Smithton American Legion Post 937.  He was a U.S. Air Force Korean War veteran.

Leo was an avid bowler for more than 50 years.  At one time, his team was called “Three Chicks and a Rooster”.  After his retirement, he took up playing golf, something he thought he would never do.  He really enjoyed playing and often travelled to golf courses in other states.  He also enjoyed playing cards, including Friday night euchre.

Leo was preceded in death by his parents, Albert R. and Olivia V., nee McBride, Dooley.

We are saddened by his passing for Leo Dooley and his wonderful family. Integrety would encompass his life story. In Prayers

To the Dooley family: I was very sorry to hear of Leo’s passing. He was a good man. My thoughts and prayers are with you. Please except my sympathy. Sincerely, Mark Forcade