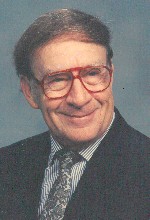 Mr. Stauder was a United States Navy veteran. He served during World War II in the North and South Pacific areas. Later he was a contracting officer for the USAF Air Mobility Command at Scott AFB and retired in 1980. Leo was a member of the Metro East Christian Fellowship and was a member of the Ministry in teaching the Bible at the St. Clair County Jail. He was an avid swimmer and a member of the YMCA and the Carlyle Sailing Association.

Leo enjoyed listening to live music throughout the city and going to movies. His greatest love was his family, and he adored his grandchildren.

He was preceded in death by his wife of 68 years, Betty L. Stauder, nee Meirink, whom he married on January 5, 1950, and who died on June 24, 2018; his parents, Alonzo and Ida, nee Durr, Stauder; two brothers, Leslie Stauder and Robert Stauder; a sister, Kathryn Stauder; a son-in-law, Robert Gaskill, Jr; two great-granddaughters, Bailey Ann and Amellia Rose McCoy; and a great-great-granddaughter, Hayden Gaskill.