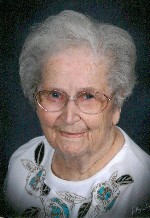 Mrs. Englerth was a homemaker who worked along side her husband on the family farm.  She along with her late husband were avid dancers and card players.  Mrs. Englerth was also a renowned baker.  She was a member of St. Peter’s Cathedral and a member of the Perpetual Help Sodality at the church.  She also belonged to the Smithton Senior Citizens Club.

She was preceded in death by her husband of 66 years, Clarence N. “Patsy” Englerth, whom she married on October 14, 1940 and who died on April 29, 2007; her parents, Harry and Flora, nee Klein, Wittenauer; three brothers, Henry, Norbert, and Mark Wittenauer; two sisters, Rita Wittenauer and Margaret Neff; two sons-in-law, Stanley James and Gregory Vahlkamp; and a daughter-in-law, Brenda Englerth.

The family would like to extend a special thank you for the care and compassion provided by the staff at Freeburg Care Center and Family Hospice.

Memorials may be made to the Alzheimer’s Association, or to Family Hospice, or in the form of memorial Masses.  Condolences may be expressed to the family online at www.rennerfh.com.

Visitation: Friends may visit with the family from 9 to 11 a.m. Saturday, February 10, 2018, at St. Peter’s Cathedral Catholic Church, Belleville, IL.