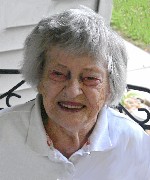 Leona led a simple life as a farmer’s daughter and later as a farmer’s wife.  Her love of the outdoors allowed the bounty of the garden vegetables and the beauty of her flowers to be shared with many.

After their retirement, Leona spent many years volunteering at St. Teresa’s cafeteria, as well as the school libraries of Althoff High School and Cathedral Grade School.  She also enjoyed providing transportation to appointments for the Poor Clares and the Sisters at Cathedral in her little red sport pickup.

She dearly loved her three granddaughters and four great-grandchildren and enjoyed showering them with hugs and kisses.

She will be remembered as an incredible woman of faith, a loving matriarch, a mean Bunco player, and a diehard Cardinals fan.

She was preceded in death by her husband of 67 years, Bill; her infant twin sons, Wilmer and Delmar; her parents, William and Sophia, nee Kassing, Kombrink, a brother, Raymond, a sister, Florence Distler; and many brothers-in-law and sisters-in-law.

The family expresses their gratitude to Leona’s very special caregivers at Carelink of Metro East and to Heartland Hospice.

In lieu of flowers, memorials may be made to the Poor Clare Monastery of Our Lady of Mercy, to Heartland Hospice, or to St. Peter’s Cathedral. Condolences may be expressed to the family online at www.rennerfh.com.

Burial will be at Mt. Calvary Catholic Cemetery, Shiloh, IL.