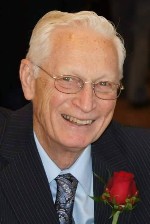 Print Obituary
Leslie L. “Lee” Vick, 84, born December 22, 1930, in Mounds, IL died Friday, February 13, 2015, in his Belleville home surrounded by his loving family. Lee was first and foremost a family man, and on February 6, 2015, he celebrated his 65th wedding anniversary with his beloved wife, Lila Vick.

Lee proudly served in the US Navy during the Korean War in 1950-51 and worked for Union Electric (Ameren) for forty years. In addition to traveling the world together, Lee and Lila were members of the American Volkssport Association and trekked in all 50 states.

A kind, humorous and gentle man of great strength and character, Lee will be dearly missed by friends, family and all whose lives he touched.

In lieu of flowers, memorials may be made to Cahokia Mounds Museum Society, Powell Archaeological Research Center or St. Henry’s Catholic Church.

Lee will be greatly missed at Cahokia Mounds. In addition to volunteering there with him, he trained me when I first arrived. I remember the first words he said were “People train many ways around here, but let ME train you the RIGHT way” and he smiled. And he did; I love it and have been volunteering now since 1999. You’ll be missed Lee.